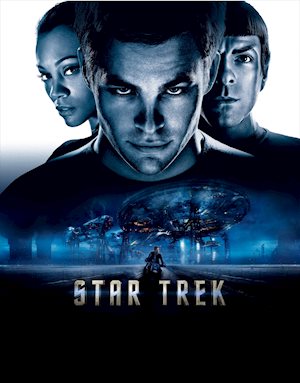 In 2006, exactly zero movies and TV episodes of Star Trek were produced, the first time since *1985*. The appeal (and, to be honest to the point of Vulcanity, the quality) of Star Trek: Enterprise was limited to mostly the hardcores, as the show’s production and marketers whiffed virtually every step of the way after casting; let’s just say no letter-writing campaign to save Enterprise emerged and few outside fandom noticed when this sixth iteration of ST went off the air.

At the box office, the box-office disappointment and dramatic disaster Star Trek: Nemesis had killed the franchise’s hopes for the films – bang went the chances of a Deep Space Nine movie appearance, too – back in 2002, and so the franchise lay aimless like a flagship without warp drive or impulse.

But you just can’t keep a good franchise down.

In the paradigm of our times, the folks at Paramount, as they had in the late 1970s, saw in Star Trek a way to keep pace with the cinematic competition. Of course, the shortest route to a few hundred millions at the box office in the late 2000s/10s has been via the reboot. Thus was the ST movie franchise resurrected in 2009 as the spartanly-titled Star Trek.

To their credit, however, producer/director J.J. Abrams & Co. pull of in Star Trek no mere reboot: In fact, in extremely clever fashion, the 11th Star Trek film is both franchise-refreshing like a reboot yet can be considered a continuation of the move series thus far – not to mention giving us the James T. Kirk origin story à la superhero flicks.

In the year 2237, a freak “lightning storm” in space has drawn the attention of the Federation starship Kelvin. From out of this storm appears a massive ship called the Narada and captained by Nero of Romulus. In short order, Nero’s guys cripple the Kelvin, interrogate its captain about “Ambassador Spock”, kill said captain, and obliterate the ship. First officer George Kirk manages to evacuate much of the crew, including his delivering wife, into escape craft, and amidst this battle is George’s son James Tiberius Kirk born.

Flash forward to 2254, where events go into fast-forward. Spock joins the Academy, Captain Christopher Pike (!) essentially recruits the young Kirk into the Academy, Kirk befriends one Leonard McCoy at the Academy, etc. Within three years, Kirk is taking – and “changing the conditions of” – the Kobayashi Maru simulation. At Kirk’s disciplinary hearing on the matter, an emergency signal interrupts the proceedings, telling of a “lightning storm”-type event near Vulcan. The Enterprise sets forth for Vulcan, with Pike commanding the Enterprise and Spock serving as first officer.

Upon arrival, Pike et al note that an entire fleet of Federation starships has been destroyed by the huge starship seen 20 years previous: The Narada begins drilling into the planet Vulcan; Kirk devises a bold plan to stop the drill’s operation by space-jumping onto the drilling platform and sabotaging the rig. He convinces one Red Shirt and ensign Hikaru Sulu to join him; though they manage to stop the drilling, Nero nevertheless releases “red matter” into the very core of the planet, thus destroying Vulcan.

Nero’s next target: The Earth. He takes Pike captive and begins interrogating him about Earth’s defense codes. Acting captain Spock and first officer Kirk (o, the irony!) engage in a heated debate about the next course of action to take regarding the Narada. Spock decommissions Kirk, Vulcan nerve-pinches him and ejects him from the ship onto a nearby ice planet. Luckily, Kirk happens to find a cave in which an aged Spock is sheltered.

Spock (or “Spock Prime” as textual material often must use) explains to Kirk that Nero’s ship and he are from a century-plus in the future – the next generation, you might say. He relates the story of an attempt by Spock and others to save Romulus with red matter, only to hasten the Romulans’ planet’s demise. Narada’s ship and Spock’s one-person craft were sucked into the resultant black hole created by the red matter experiment and sent into the future because black holes are weird. When Spock finally arrived some 20 years after the Narada, Nero captured him and ditched him on the ice planet so as to view the destruction of Vulcan.

Spock and Kirk hike to the nearby Starfleet outpost on the planet to find Federation engineer Montgomery Scott. The three create a way to beam aboard the Enterprise. Once back aboard, Kirk provokes Spock into an emotional response, thus indicating he’s unfit for the Enterprise captaincy. Kirk takes command of the Enterprise and has a course set for Titan, where he riffs on the old hide-i-the-nebula trick. When the Narada approaches, Kirk and (young) Spock beam aboard the ship; Kirk kills one of the Romulans and frees Pike while Spock steals (ol) Spock’s shuttle and destroys the Earth drill.

(Young) Spock, having seen Star Trek: Nemesis, then rams (old) Spock’s ship into the Narada. The Narada’s own stash of red matter ultimately destroys the ship, taking all aboard with it.

Back home, Starfleet authorities establish the familiar bridge crew for the Enterprise: Kirk, Spock, McCoy, Scott, Sulu, Uhura and Chekov are assigned to the ship.

The 2009 Star Trek movie is most easily comparable within the franchise to Star Trek: Generations. Like the 8th installment, this 11th movie devotes much screen time to introducing the characters to a mainstream movie audience while also overpaying the lip service to fandom, sense and continuity be damned.

And whoa, do the plot holes and dependence on coincidence get sizable in Star Trek…

Just off the top: What in the name of Feklar was Nero doing aboard the galaxy’s most dangerous starship for 20 years while waiting for Spock? Why would Nero need Earth’s defense codes if he’s packing a massive ship that’s 125+ years more advanced than Federation technology? (And didn’t Vulcan have this technology?) Where’d he get that ship, anyway? (That sure don’t look like any Romulan ship we’ve ever seen in any generation.) Is it really standard procedure or even logical behavior to dump the second-in-command on some barely inhabited planet? Most of all, gee, it sure is lucky that (old) Spock, Kirk and Scotty all ended up within about a 10-mile radius of one another, eh?

Balancing all the nonsense, on the other hand, is the wonderful Star Trekkiness of Star Trek. If you’re gonna do a ST origin story, must haves include Captain Pike, green-skinned coeds, fistfighting and the Kobayashi Maru scenario. Legendary within the ST universe since its mention in The Wrath of Khan, this bit of lore was done extremely hilariously by Chris Pine et al.

Speaking of Pine, we may also say that the Star Trek reboot film has it all over the original series c. 1968 in terms of acting. All the primary cast members are already well more comfortable with their characters than Shatner’s bunch would be until the early 1980s. The problem with everything else is that Star Trek feels less like a film and more like a pilot for things to come. Good fun, but not very substantial.