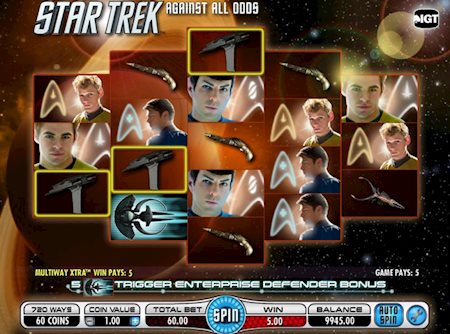 The Star Trek: Against all Odds slots game is more than a mere sequel to the big-budget Star Trek slot based on the 2009 movie of the same minimalist name: This online slot is an exciting trip through innovative game features while taking an incredibly deep dive into the Star Trek mythos. Best of all, however, is that this slot’s backstory is no dependent upon an expansive knowledge of the ST universe, which is good because the Against All Odds slot contains references that only series trekkies (ahem) will get.

What is the story behind the Star Trek: Against All Odds slot?

The casino game software designing folks at IGT have combined plot elements of the 2009 Star Trek movie together with backstory leading up the events of the film. (The full backstory, including fuller explanation of just how Spock and Nero ended up nearly a century in their own past, was captured in a very nice limited comic book series featuring Ambassador Spock, also with Admiral Picard, Captain Data and Klingon Chancellor Worf,)

In short, this slot is loaded with espionage mission objectives, exploding starships and red matter aplenty.

Does this slot game really have 720 paylines?

Affirmative. The game grid is laid out in a diamond format – perhaps thusly shaped to represent the dilithium crystal matrix in the warp engine – of reels running in columns of two, three, four, three and two from left to right. Winning combinations are produced whenever at least three like symbols appear in adjacent reels in either direction.

What are the bonus features in the Star Trek Against All Odds slot?

First up is the random “Energizing Wilds.” After any spin, anywhere between two and five low-paying symbols may be transformed into wilds. We suppose this is some sort of simulation of Mr. Scott proverbially beaming up our heroes, but if the transporter turned organic or inorganic matter into wilds substituting for other matter in the universe I’d be a bit concerned for the safety of my crew – and I’d have to admit that Bones was right about those things…

The “Enterprise Defender Bonus Round” (yes!) is launched after landing five bonus symbols anywhere on the reels in a single spin. We’ve gotta say that this video bonus round is a lot more Star Wars – OK, maybe ST:TNG during a particularly nasty skirmish with Borg – than Star Trek. Here, the player is tasked with blowing the hell out of enemy ships in a way that would baffle Spock and might even shock flyboy Han Solo himself. Damn if it ain’t fun though … and the higher your score the higher the prizes in the “wheel of fortune” round thereafter.

Any last words of advice?