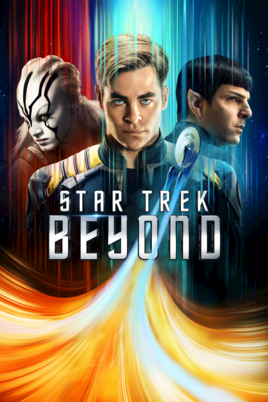 From the vantage point of 2017, one wonders if this will be the last of the Star Trek rebooted movies. Ostensibly, Paramount has greenlit a 14th Star Trek film. A full year after the announcement, next to absolutely zero outward progress or contracting of cast has been seen and, like STG says, one wonders.

Meanderings aside, Star Trek Beyond could well go down as the best and most underrated of all the Star Trek films. More so than any of its 12 predecessors, Beyond feels as though written and produced with the hearts of fans. And indeed, the original story for the film as well as a great eal of script were penned by Simon Pegg. (Incidentally, with credits in Star Wars and Doctor Who in addition to his turn as Scotty in the rebooted universe films may make Pegg the Greatest Geekiest Geek of all-time.)

Star Trek Beyond may have drawn the least box office, perhaps due to a general polish-off-the-apple feel of the franchise by this third reboot film, and that’s unfortunate because Star Trek: Beyon is a movie even the casual ST fan can dig – and with high rewatchability to boot!

After just three years’ worth of missions, James T. Kirk applies for a vice-admiral position, clearly indicating that this is not the original series universe version of the guy who gave the “while you sit in that chair, you can make a difference” of Star Trek: Generations. Everyone on the bridge crew except for that working stiff Montgomery Scott and Lt. Uhura are meanwhile enjoying some R&R on the space station Yorktown.

In the tradition of Star Trek movies, the Enterprise is dispatched to a rescue mission inside a nearby nebula. (Someday, Starfleet officers will be told once and for all to stay out of nebulas; bad things happen in those.) Also in the tradition of proper Star Trek films, Kirk sets to destroying the Enterprise, after aliens trash the bejeezus out of the ship and take a few dozen crewmembers captive.

Thus begins a rollicking story in which the various stars are teamed up in an effort to thwart Krall, the leader of the attacking aliens. Teamed up are Kirk and Chekhov; Scotty and the new character Jaylah (she digs on Public Enemy so is 100% OK with Star Trek Guide); and, most awesomely, Spock and McCoy. (Uhura, having broken up with Spock early on, and Sulu, shown to be gay early on, have apparently fulfilled their purpose for most of the film’s remainder.)

These groups are reunited near the long-downed USS Franklin, on which Jaylah has lived for most of her life. The enterprising (damn, sorry) lot manage to get the Franklin in decent working order and transport the Enterprise crew aboard from right under Krall’s nose. They discover that the artifact for which the Enterprise had been raided was a component to a nasty little weapon with disintegrates organic life forms instantaneously.

The bridge crew then leads the Franklin in a dandy dogfight against Krall and zillions of tiny swarming drones; Kirk, Jayhah et al manage to find a solution to the swarm problem equal parts clever and satisfying. Krall nevertheless manages to make it back to the Yorktown, where he plans to deploy the weapon. Naturally, Kirk’s having none of that nonsense and gets to celebrate his birthday in one piece.

Star Trek Beyond uses the familiar formula for any successful Star Trek film: To maximize action, suspense and character development, spend the majority of screen time with the crew divided into separate teams. Think The Voyage Home, First Contact or … this movie. It’s the strong interplay of the pairs and trios in this film.

The semi-antagonistic relationship between Spock and McCoy was always get fun, and the interplay between these two is the first real dramatic justification for continuing the Star Trek series with new interpretations of the old characters. These two could simply let the lines perform themselves, given the culture’s familiarity with the pairing, but they don’t and the extra elan is pure movie and/or Trek magic.

Atop story line and characterization in Star Trek Beyond is its strength as a standalone movie. Sure, fans will enjoy in-universe references to the Xindi and Commodore Paris but Beyond feels far less shackled to the past than either of the first two reboot films. With no rewrites of history or parallel time-lines to openly contend with, Beyond allows the story to breathe and the characters all that abstract organic potential.

With a relative minimum of coincidences and plot holes to remark upon, we can unabashedly state that Star Trek Beyond is easily the best of the first three rebooted ST universe films. It is a shame the that box office (and subsequently popular ratings on Rotten Tomatoes, we believes) suffered due to incredible management of the ST powers-that-be in essentially ignoring all attempts to celebrate the franchise’s 50th anniversary in *September* 2016…