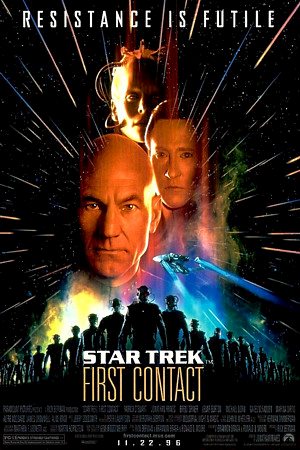 Let’s put it this way: If you prefer any iteration of Star Trek other than the original series, Star Trek is the best of the ST movies. And no matter which of the franchise’s eras you prefer, First Contact is undeniably among the top Stories in the ST pantheon, film or TV.

And to all those who disagree, you will be assimilated.

Captain Picard is awoken from a nightmare to be informed that the Borg are encroaching upon Starefleet space. Further, the Enterprise is to stay away from any engagement with the Borg, essentially due to Picard’s previous, likesay, interaction with the Borg. Quicker than you can say, “You will be assimilated,” the Borg are attacking (and kicking the hell out of) several Federation starships in an attack on Earth itself. Picard leads the Enterprise into the fray and manages the destruction of the Borg cube.

But. A small sphere has been launched toward Earth; this bit of Borg technology is creating a “temporal vortex” which will allow it to travel backward in time. It does so and the Enterprise pursues. Upon arrival, the Borg sphere immediately launches an attack a small settlement in Montana below. The Enterprise crew surmises that they’ve emerged one day before Zerfrim Cochrane successfully launches a warp drive-powered ship and “First Contact” between humans and a spacefaring alien race is made.

Picard, Data and Worf lead security teams to investigate the extent of Borg infiltration directly. Dr. Crusher leads her medical team and the now-revived Lily out of sickbay as some Borg enter there. In an attempt to enter main engineering, Data is captured by the Borg and sealed away from Picard and the rest.

The Borg have inexplicably halted their assimilation of the Enterprise after capturing Data. As certain Enterprise security codes are locked in the android’s “positronic brain,” the Borg, primarily in the form of the Borg Queen, are getting to work on tempting the secret out of him. The Borg Queen harangues Data a bit, teases him (kinky cyborg sex!) and promises him power with the Borg.

Picard discovers yet another element to the Borg’s plan: These Borg seek to signal their contemporaries in the 21st century in hopes of bringing them to Earth. Picard takes Worf and one Lt. Hawk (a redshirt if ever was) on a spacewalk to remove the needed hardware from the Enterprise’s hull. Once this plan in foiled, the Borg continue in the ship’s assimilation, thereby prompting Picard to give the order to abandon ship. And he sets the now well-familiar self-destruct sequence running so as to annihilate the third Enterprise in six films.

Picard goes to engineering to confront the Borg Queen, only to discover that Data has joined the Borg collective. Data halts the self-destruct sequence and enters the security codes, giving the Borg control of the ship’s weapons functions. On Earth, Cochrane, with Ryker and LaForge aboard, get the rickety rocket to lift off. As the Phoenix comes into view of the Enterprise, the Borg launch two photon torpedoes at the ship … only to miss. Data has in fact rigged everything to preserve the Phoenix’s flight, and he releases a flux that destroys living tissue, thus killing the Borg on the ship.

As night falls on Montana, an alien ship touches down outside the camp, and Zefrim Cochrane greets the first extra-terrestrials to formally meet Earthlings: Surveyors from the planet Vulcan.

What heaps of praise can Star Trek Guide pile onto too Star Trek: First Contact that hasn’t already been, um, assimilated into the mix already? The main players, given a tight script and plenty of production time, are only made better by a couple of the best supporting-actor turns in the entire Star Trek movie run, namely James Cromwell as Cochrane and Alfre Woodard as Lily.

And the ratio of Star Trek goodness is extremely high in this one as well: This starts with the Borg of course, easily the biggest badasses ever to romp the Star Trek universe (Species 8472 notwithstanding). The list hardly stops there, though: You’ve got ST history (more on this below); a nice battle with about 189 ships involved; a spacewalk (shades of The Motion Picture!) the single best use of the Holodeck in any ST; an excellent Voyager cameo/reference; and even Vulcans in an unwitting setup for Star Trek: Enterprise, which would hit TV screens five years later.

And of course, Data’s denouement-capping “Resistance … is futile!”

While this stuff is great for Star Trek fans, the real magic of Star Trek: First Contact is its broader appeal, as the film works on the levels that have driven ST fandom for 50 years. The appealing nature of the story, which bounces from the more dramatic struggle against the Borg to tighter interactions between crew and Cochrane, is helped tremendously by the snappy pacing and crisp editing, for which Jonathan Frakes may take much credit for a directing job well done.

It’s the script by Brannon Braga and Ronald Moore that’s the real standout among all the other 10/10s in Star Trek: First Contact. Consider the trick pulled off by Braga and Moore here. First Contact is no simplistic Terminator-like time travel tale. The trope of “preserving history” is at the heart of First Contact but whereas time-travel yarns about the American Civil War, World War II, the assassination of Abraham Lincoln, etc., are rife, the key event is this film is *utterly fictional* as well. How many film franchises could pull off such a story?

We say only one.