Star Trek: Generations -- Two captains. One destiny. And many subplots.

To Star Trek Guide, Star Trek Generations is something of a paradox. Loaded with flaws ranging from the canon-busting (likesay, if Guinan and the El-Aurians knew about the Borg 70 years before the Federation’s first run-in with them, why didn’t they say something?) to the plain old mean-spirited for no reason (Did they really have to kill off Picard’s entire family?) to the weak (Scotty and Chekov’s dialogue is clearly written for Spock and McCoy), there’s just so much awesome ST universe stuff in here to be the franchise leader in fist-pumping moments per capita.

Fan service this may be, but this fan loves the service. 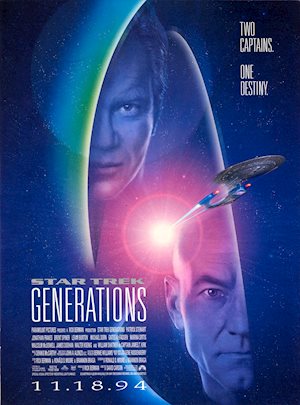 In 2293, Captain (ret.) James T. Kirk, Commander Pavel Chekov and Montgomery Scott are in attendance at the ceremonial maiden voyage of the Enterprise “B”. Naturally, the unready new Enterprise is pressed into action: A massive and destructive natural phenomenon is destroying a pair of El-Aurian starships. A few dozen are saved from the El-Aurian ships, but both are destroyed. Taking massive damage, too, is the Enterprise B and Kirk is presumed dead when the part of the ship he was in was torn away by the rift.

Seventy-eight years later, the Enterprise “D”, i.e. that manned by Captain Jean-Luc Picard and his crew, receives a distress call from a nearby orbiting observatory. An away team pulls from the wreckage on an attack one Dr. Tolian Soran, an El-Aurian seen earlier in the film among those survivors of the destroyed starships. Dr. Soran is housed aboard the Enterprise temporarily but repeatedly inquires about returning to the observatory. Once Picard gives the OK, Soran returns with Lt. Geordi LaForge and Commander Data, the latter attempting to control his newly-installed “emotion chip.”

Once at the observatory, Dr. Soran knocks out the unsuspecting LaForge, cows a cowardly Data and launches a missile into the nearest sun. Soran teleports with the unconscious LaFroge onto an arriving Klingon warship; Data is transported out by the Enterprise before a solar shockwave destroys the entire station. Soran is in fact in league with the Duras sisters (Yes!), a pair of ladies who believe their clan should rule the Klingon Empire.

Picard learns more about Soran and the incident of 78 years prior from his cosmic informant Guinan: As it turns out, the phenomenon witnessed by those aboard the Enterprise B was something the El-Aurians have taken to calling “The Nexus.” For those pulled into the “ribbon,” the Nexus is a sort of solipsistic pocket universe akin to being “inside joy” wherein space and time don’t exist in the conventional sense. This knowledge, combined with some deduction by Picard and Data reveal that Soran’s blowing up of a star was an attempt to manipulate the ribbon so that he may finally enter the Nexus. They deduce his next stop and set course to intercept.

Once the Enterprise is within range of the cloaked Klingon Bird of Prey, the parties arrange a “prisoner swap”: LaForge is returned to the Enterprise, while Picard is sent to Soran’s location on the uninhabited planet Veridian III. Therein, Soran is readying the launch of another sun-killing missile while Picard first attempts to reason with Soran before finding a way past the protective force field protecting the missile launchpad.

As Geordi’s sightseeing “VISOR” has been tweaked by Soran, all LaForge sees is transmitted to the Klingon ship – including certain defense codes. A corker of a battle between the Enterprise, captained by William T. Ryker and the Duras Sisters’ ship breaks out in which the latter is destroyed and the former beaten enough to force a crash landing on Veridian III.

Elsewhere on the planet’s surface, Picard gets through the invisible barrier, but is beaten in a fistfight by Soran. Soran launches the missile, the star explodes, the ribbon swallows he and Picard, the remaining Enterprise crew as well as the 230 million humanoids of Veridian IV are vaporized in a supernova.

Picard “awakens” in the Nexus, where he finds he has a rich family life – but despite the murkiness of his memory, he knows everything is wrong. A sort of “extension” of Guinana appears to him, explaining the nature of the Nexus and ultimately introduces him to Kirk, alive and well and in the Nexus for decades. Picard convinces Kirk of the Nexus’s illusory nature – not to mention the chance to win against insurmountable odds…

Look, say what you what about plot holes and weird script choices, but Star Trek Generations is nothing if not *a lot* of concentrated Star Trekkiness. Just look at the checklist of items: Kirk as hero on the ship and in the fisticuffs! Badass Klingon women! Ryker in a dogfight! An entire subplot and lots of screen time given to Data! Guinan doing Guinan things!

And, of course, Patrick Stewart. In so many ways, Stewart may be the greatest contributor to the Star Trek universe after Gene Roddenberry himself. Not only did he manage to lead a highly risky television venture into pop culture iconography itself, his portrayal of Captain ean-Luc Picard has been dead-on perfect since day one. His turn in Star Trek Generations is up to usual peak standard; any scene he shares with the amazing and brilliant Malcolm McDowell, Brent Spiner or Whoopi Goldberg is sheer magic. The scene set in the “Stellar Cartography” room, both in terms of visuals and dialogue, is certainly one of Hollywood’s very best in 1994.

Not a hardcore Star Trek fan? You may not grok a great deal of Star Trek Generations. A Star Trek fan obsessed with continuity and canon? Yeah, we can imagine you’d have problems. So call Star Trek Guide in the sweet spot for this movie and if you’ll excuse us, we’re feeling like a 27th re-viewing…