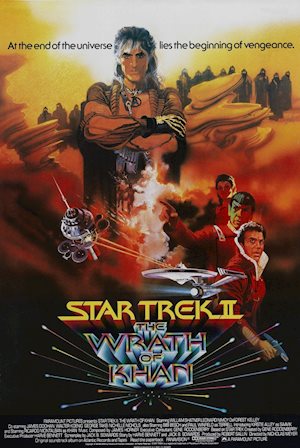 As cherished and celebrated as Star Trek II: The Wrath of Khan is today – not to mention the seeming obligation to craft sequel(s) to any remotely successful big-budget flick – it’s strange to consider that the film almost didn’t come off.

Though most of the Star Trek cast’s principals were not exactly working steadily and could easily sign on for Star Trek II, III, IV, etc. etc., Leonard Nimoy was a sticking point. After the incredible under-writing of characters in Star Trek: The Motion Picture, Nimoy was hesitant to take on another ST film; after all, the guy had co-starred in Invasion of the Body Snatchers the year previous and was into his 5th season as host of the TV documentary series “In Search Of.” Nimoy ultimately acquiesced, of course, but demanded the inclusion of Spock’s death in the script.

And when shooting was done, Nimoy decided it had been so much fun that, yes, he’ do another one.

For most casual fans and devotees alike, the Wrath of Khan represents peak Star Trek, and why not? From the TV show came all the pulpy heroism and space operatics, from Hollywood came the big-budget special effects that made for all the edge-of-seat starship dueling that dominates the third act. Star Trek II was not stuff for the popcorn munchers, this was movie science-fiction done differently: Star Trek II isn’t straightup science fantasy like Star Wars, nor is it the heady philosophy of 2001: A Space Odyssey nor the comedy hijinks of a Back to the Future.

The federation starship Reliant is captured by a craft captained by one Khan Noonan Singh, a one-time genetically altered “super soldier” who had a previous encounter with Captain James T. Kirk and the starship Enterprise crew. Among the officers taken with the ship is Commander Anton Chekov. Khan learns about the federation’s new planet-building device known as Genesis, going on to plunder the space station housing Genesis and taking the scientists primarily responsible for its development, Dr. Carol Marcus and Dr. David Marcus.

While on a training exercise with Captain Spock’s protégé Lt. Ssavik, the Enterprise receives a distress call from the Regula space station. On its way to Regula, the Enterprise is jumped by the Reliant, now piloted by Khan’s crew and a battle ensues. The Enterprise progresses onward to Regula, ultimately finding the Genesis scientists and the Reliant crew. Believing Kirk et al to be stranded within the interior of Regula, Khan takes the Genesis device and gets the Reliant repaired. Kirk cries out “Khan!” and finds out Dr. David is his son – one in every port, eh, Kirk you old dog…?

Kirk and Spock have outwitted Khan, however, and all are soon back aboard the Enterprise, which leads the Reliant into a nearby nebula inside of which a terrific space duel ensues. Kirk naturally gets the better of Khan, who, before dying, uses Genesis as a missile to destroy the Enterprise. This is avoided but only due to the Spock’s suicidal manual repair of the warp drive. Spock is given a funeral and his body laid to rest on the new planet created by Genesis.

Within maybe five minutes, the upgrades from the first Star Trek cinematic experience are apparent: The snappy red uniforms, the special effects (solid without all the pretentious Hollywood epic-ness) and Kirstie Alley as Lt. Saavik Rarely has *any* actor in Star Trek nailed his/her characterization from the go, but Alley certainly does here: No supporting character in a ST film is flat-out this good until Alfre Woodard and James Cromwell come along in Star Trek: First Contact.

As for the actual plot of Star Trek II, we’d advise you not to look too closely. Star Trek II is ruled by healthy dollops of coincidence and plot convenience, starting with the good old “the Enterprise is the only ship within range” trope and running straight through to “good thing they didn’t actually, you know, *bury* Spock’s body.”

But for once, Star Trek Guide is willing to overlook certain major plot holes (hey, good thing that brain worm thing left Chekov’s head of its own accord) for the sake of Star Trekkiness. Ricardo Montalban as Khan gets his scene-chewing moments, but tones down the melodrama for film to decent effect. Scriptwriter Jack B. Sowards gets high marks for balancing the character in correct proportion, i.e. the Kirk-Spock-McCoy trio gets the majority with others contributing in turn, as well as memorable dialogue.