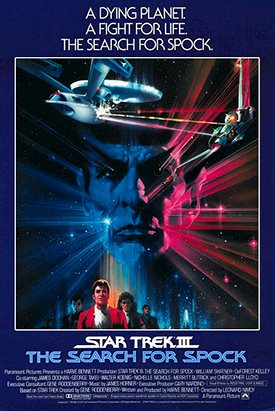 Straight through to the 14th installment of the Star Trek movie series, nearly every installment may be considered a standalone film, most independent of the events of the preceding episode. This rule holds true except for the very conspicuous trilogy of films which directly run together; Star Trek III: the Search for Spock is the middle film in that trilogy.

With Leonard Nimoy playing a bit part in film only (sorry, spoilers), he was tasked as director for the film, thereby setting a precedent for Star Trek actors to direct both episodes of the “second generation” TV series as well as more ST movies (Nimoy also directed Star Trek IV; William Shatner helmed V; Jonathan Frakes oversaw VIII and IX). Knowing the material and characters as well as anyone associated with the franchise, Nimoy helped create one of the best films of the Star Trek series by leveraging all its strengths: The Search for Spock includes some great character notes, nice one-liners, the traditional Kirk fisticuffs and spacefaring action.

We can also say that Star Trek III carries the most misnamed subtitle as well: “Search for Spock”? What search? His body ain’t going anywhere…

The Enterprise returns to Earth after the events of Star Trek II: The Wrath of Khan. Dr. McCoy is acting strangely and is taken for hospitalization. The remainder of the crew is told to keep quiet about Genesis, as the project is completely confidential. Spock’s father Sarek arrives to chastise Kirk in vague terms about having left his son’s undead body behind.

On the planet transformed by Genesis – and Spock’s final resting place – Dr. David Marcus and Lt. Saavik find a Vulcan child as well as life well too advanced to have been created by Genesis. Unbeknownst to Starfleet, Klingon captain Kruge has learned of Genesis; he destroys the federation starship Grissom, on which Marcus and Saavik had arrived, and takes them hostage.

Kirk and Sarek have deduced that Spock managed to “transfer his katra” into McCoy’s mind and that Spock’s body and soul may yet be reunited. To do so, Kirk and his loyal crew devise a plan to swipe the Enterprise from spaceport, rocket to the Genesis planet, grab Spock’s body and reunite Spock’s various bits on Vulcan.

Of course, since Kruge and his band of not-so-merry Klingons is there., things aren’t so simple. By the time Kruge and his compadres are dispatched, Marcus has been killed, the Enterprise has been destroyed, the planet’s terraformed environment has gone globally haywire, and Spock’s body has aged through teenhood (thanks in no small part to Ssavik’s assistance with the ol’ pon farr ritual).

Nevertheless, Spock is resurrected in the end and quizzically raises the trademark eyebrow. The audience cheers, triumphant music plays and screen credits promise a sequel.

As stated above, Star Trek III: The Search for Spock is one of the most underrated films in the ST oeuvre: Come on, a 62% Rotten Tomatoes audience rating? (When Star Trek VI gets an 83%?!?!?!) Star Trek Guide isn’t exactly sure why this could be, but we theorize the absence of Spock – arguably the most popular character within the original cast -- for the majority of the film heavily factors in. If so, that’s quite unfortunate, because this movie (in combination with Star Trek IV) allows most of the “minor” characters some of their finest moments. And with Spock out of the way, much more weight and screen time is given to DeForrest Kelley, whose tormented Dr. McCoy is just as amazing as when trading barbs with his Vulcan foil.

In terms of ST mythos, the most notable additions to lore made in this film are all about the Klingons. The Search for Spock represents the first new-look Klingons, revamping the aliens’ look, their outfits, their language, their ships, even their pets. Christopher Lloyd is the first actor to test-drive Klingons 2.0 and he’s still one of the most memorable of the lot.

The biggest minus against the top-notch effects, often hilarious dialogue and Klingon badassery? Easy: Robin Curtis as Saavik, and it’s not even close. After the killer job done by Kirstie Alley in creating an interesting new character for the ST universe, along comes what we can only assume was a low-cost replacement for the Cheers bartender. Not only does Curtis look nothing like Alley, she evidences none of the charm or comic timing of here predecessor. All in all, this Saavik is a serious negative against a pastiche of positives.

Overall, though, Star Trek III is worthy of a big thumbs up. We have no clue who the hypercritical 39% voting at Rotten Tomatoes are, exactly, but we’d suggest a re-viewing…