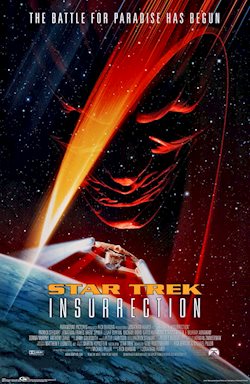 After the epic scope of the previous four movies (in order these involved a classic Insane God, a Klingon/Romulan/Federation conspiracy, a spacetime-ripping starship-destroying natural phenomenon, and the badder-than-all-three-combined Borg), it’s not extremely surprising that Jonathan Frakes and the Star Trek creative team sought to tone things down a bit for Star Trek IX.

So far, so good. Such a metaphorical palette-cleansing had proven to work wonders for the franchise before in 1986 with Star Trek IV The Voyage Home. Unfortunately, the ST powers-that-be eschewed an attempt to try something refreshingly different as they had five movies earlier, instead grounding Star Trek Insurrection in perhaps the second-most (ab)used trope in the ST universe, namely that of the hippie utopia planet.

The result is Star Trek Insurrection a movie low on plot, light on action and nearly devoid of shoot-‘em-up space battle action. More than any of the Star Trek film does Insurrection feel like a TV script lackadaisically slapped together and presented as a feature film.

The unnamed planet is an idyllic postmodern hippie utopia planet missing only the hacky sacks and Phish concerts. The Federation has established an observational output on the planet, ostensibly for anthropological (exopological?) purposes. The low-tech peace is soon broken by an out-of-control Commander Data, who reveals the secret Federation base to the planet’s citizen, people known as the Ba’ku.

While on an unrelated diplomatic mission, the Enterprise is summoned to the planet so that Data may be examined, repaired and or shut down. After a pretty silly pursuit, Captain Picard and Lt. Worf manage to corral the android.

As the Federation representatives and Enterprise crew attempt to make nice with the Ba’ku – “Terribly sorry about that whole continual surveillance thing, old chaps...” – Picard and Data lead an investigation to find the cause of Data’s previous errant behavior. The search ultimately reveals (in very Truman Show fashion) further facades that lead to revelations of a Federation conspiracy.

In the best tradition of ST:TNG, the Federation has derived a plan in tandem with the mysterious Son’a, gnarly looking dudes who apparently employ the beautician featured in Terry Gilliam’s Brazil. Said plan involves secretly relocating the Ba’ki en masse to a similar planet elsewhere while Federation and San’u interests control the regenerative properties the Ba’ku planet naturally provides.

When Picard’s appeal to Admiral Dougherty to stop the madness falls on deaf ears, the Captain decides to go rogue, as does his trusty bridge officers: Data, Worf, Comm. Ryker, Dr. Crusher, Geordi LaForge, Counselor Troi. They set to work blasting away at drones while shielding the Ba’ku for Son’a aerial attack in nearby caves. Simultaneously, Ryker and LaForgeare attempting to take the Enterprise out of the quadrant in order to bring more Enterprise authority on Dougherty’s operation. Ryker ultimately wins the dogfight, but gives the Enterprise a good pummeling in the process.

And then, suddenly and anticlimactically, Ryker’s message gets through and Picard convinces a San’u to assist in his subversion. The Federation puts the project on hold “pending investigation” and most of the San’u, who we’re told are of the same species as the Ba’ku. And the Enterprise departs.

Near the beginning of Star Trek Insurrection is a line referencing the ongoing Deep Space Nine: We’re told by the dastardly Ru’afo that within the past two years, the Federation has been “challenged by every major power in the quadrant: the Borg, the Cardassians, the Dominion. They all smell the scent of death on the Federation.” Now *that* sounds like the backstory for Star Trek IX, so why this?

But no. Coming off the franchise’s strongest film of the 1990s, the ST production team somehow lost all confidence in the material, all insight into the characters (Wait, why does Data suddenly lose his “emotion chip” after toting it in his head for the past two movies?), and all flair for the dramatic dogfight.

And absent most conspicuously is the humor and zippy dialogue so essentially to the success of even the most remotely watchable of the Star Trek movies. Lines like “Do you feel your boobs getting tighter?” and humor based on Klingon acne are the order of the stardate here and this film is none the better for it.

Of course, it’s not all bad in Star Trek Insurrection. Patrick Stewart’s still aboard, so we’re guaranteed at least one five-star performance, even if Brent Spiner has had his character set back (again, basically entirely inexplicably) several seasons’ worth of TV show. Star Trek: The Next Generation ultimately produced 179 episodes? Could we come up with 89 or 90 better than Star Trek Insurrection? Probably – thereby putting cinematic episode no. 9 in the “mediocre” category.

To be realistic, it could be worse: At least it’s not Star Trek: Nemesis...