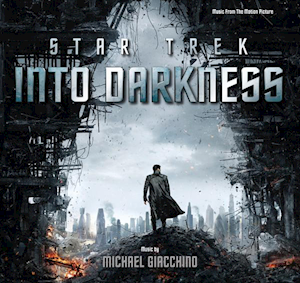 Thinking back on Star Trek into Darkness, it seems the ST production team was screwed from the start. First off, there’s that title, particularly the “darkness” part. First of all, how could this installment of the series get any darker than the 2009 flick in which Vulcan, that home planet of humanity’s mentor and peace-loving logicians? Secondly, didn’t J.J. Abrams’ incessant lens flares remind us that Star Trek has always been about a shiny, happy, positive future? What do you want the intrepid crew of the Enterprise getting grim ‘n’ gritty for?

Moving on to the story line itself … Star Trek fans and cognoscenti had taken to referring to into Darkness as Star Trek 2 – that’ Arabic number 2, not Roman numeral II, and thus surely many felt the need to reboot Star Trek II into the new universe. But, simply put, why attempt to do the Khan story again? Okay, sure, Benedict Cumberbatch was caught at his trendiest (between seasons of the BBC’s Sherlock and the Hobbit films, one year before an Oscar-nominated turn in The Imitation Game), but even he wouldn’t work in the shadow of Ricardo Montalban’s legendary melodrama.

And all that insistence pre-release that Cumberbatch wasn’t playing Kahn … yeah, that sucked.

Captain James T. Kirk once again gets himself busted for grievous violation of the Prime Directive; in fact, the first five minutes of Star Trek Into Darkness is probably used at Starfleet Academy to demonstrate in how many ways the ‘Directive can be broken. Once again, Captain Christopher Pike takes command of the Enterprise, and Kirk is demoted to first officer status. Spock is transferred to another ship.

A terrorist attack masterminded by one John Harrison (really Khan) in London kills several high-ranking Starfleet officers. Harrison (Khan) also attacks Starfleet HQ in San Francisco, killing more officers, including Captain Pike. Harrison (Khan) then transports (!) to Kronos, the Klingon homeworld. Kirk and Spock are immediately reinstated as 1-2 officers on the Enterprise which is armed with new “long-range stealth” photon torpedoes – all the better to kill Harrison (Khan) with. Engineer Montgomery Scott objects to the use of untested devices and resigns.

The Enterprise heads for Kronos, but the warp engines break down when nearly there. Kirk, Spock and Uhura pilot a shuttlecraft down to the planet. The Klingons get into a scrap with the humans, who are ultimately assisted by Harrison (Khan) himself, who then surrenders. Harrison (Khan) shows the Enterprise crew that the torpedoes are actually filled with the bodies of his former crewmates in suspended animation. O, and this point he finally drops with the pretense, telling them that he’s Khan.

As it turns out, the Federation’s Admiral Marcus (father of Carol and commanding officer who sent the Enterprise on the supposed Kill-Harrison/Khan mission) revived the genetically-enhanced Khan (Harrison) and shipmates in order to help the Federation fight a war against the Klingons. Marcus in fact sought to start the war by crashing the Enterprise engine’s in hopes the Klingons might attack. As veracity of his claims, Khan (Harrison offers Kirk some Earth-based coordinates, which Kirk has Scotty check out.

The Federation war ship Vengeance appears, and Adm. Marcus declares that Kirk et al must release Khan (Harrison). The Enterprise flees for Earth and Vengeance follows. Once nearby home, the Vengeance beams out Dr. Carol Marcus and orders an attack on the Enterprise. However, the Vengeance’s weapons systems go offline thanks to some sabotage by Scotty.

Meanwhile, o, you bet Khan (Harrison) survived the crash. With Kirk dead (for a few minutes), Spock engages in fisticuffs with Khan (Harrison), besting him and nearly killing him. McCoy resurrects Kirk with some of Khan (Harrison)’s “super blood.” These are the voyages of the starship Enterprise.

How unwise was Abrams & Co.’s choice to redo the Khan storyline? Not only from shot one is this film operating in the shadow of the fun romp that was 2009’s Star Trek, but the specter of 1982’s Star Trek II is also pervasive. Doubling down on this risky choice, Star Trek Into Darkness embraces the reboot aspects until the film becomes an exercise in the-same-but-a-little-different trivia.

Naturally, the attempts to reshape Wrath of Khan iconic moments come off the worst: Chris Pine reshaping Leonard Nimoy’s lines of Star Trek II is silly at best and a cheap knockoff at worst. And pity poor Zachary Quinto, forced to yell out “Khaaaaaaan” to direction which surely included the descriptor “the same as Shatner’s but different.” Bad stuff.

The inclusion of Nimoy’s Spock is completely gratuitous, its only significance completely meta, i.e. this marks the man’s last turn as the character. A new low for the film, as well as a neat exposure of the often too-convenient time travel plot device: “As you know, I have made a vow never to give you information that could potentially alter your destiny. Your path is yours to walk, and yours alone. That being said…” On top of this silliness, consider: Given how events enfold in the ST reboot universe (the same but different!), how exactly did (old) Spock help (new) Spock’s crew?

On top of this stuffage of square pegs into round holes is some sort of heavy -handed commentary on 21st-century terrorism – but the dastardly deeds committed by Khan and the animosity we’re told he deserves seems completely unwarranted, considering what he’s up against. Think about it: Isn’t it kinda sorts reasonable that the dude would prefer that he and his comrades not to be used as torpedo fodder and/or get blown to smithereens by this same Federation?

Any lighthearted humor – another key to the success of Star Trek – that works in Star Trek Into Darkness is executed by Karl Urban’s McCoy and Simon Pegg’s Montgomery Scott. Beyond these two, the groans well outscore the titters; the material just isn’t there. Zoe Saldana’s Uhura comes off particularly badly in this regard, portrayed as obsessed to the point of distraction with her half-Vulcan boyfriend’s emotional inaccessibility – talk about your Bechdel Test fails…