Star Trek IV: The Voyage Home -- How on Earth can they save the future? 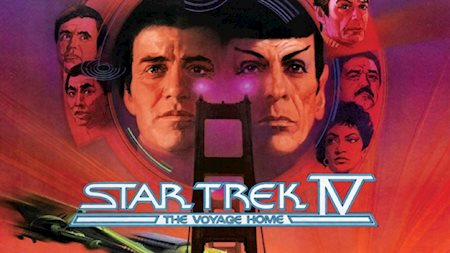 Star Trek IV: The Voyage Home demonstrates both the pervasiveness of ST in cultural consciousness and the strong health of the franchise in the 1980s. Through a combination of public knowledge of the beloved Star Trek characters and good old-fashioned fish-out-of-water stuff, Star Trek IV takes the Enterprise crew and its audience on a surprising, twisty-turny and above all fun trip that might’ve been 90 minutes’ worth of court martial proceedings highlighted by attorney posturing.

The Voyage Home caps the trilogy begun in Star Trek II: The Wrath of Kahn nicely, ultimately creating one of the all-time great science-fiction three-packs (spare us your talk of Star Wars; this is a Star Trek site. And Back to the Future? Come on!). Slim on special effects, this one’s big on heart – and well-developed of funny bone.

With Spock mostly recovered from his resurrection/regeneration in Star Trek III, the crew of the Enterprise decides to pilot their stolen Klingon ship (with which they absconded in ST III) back to Earth in order to face their lumps at Starfleet HQ. Upon approaching Earth, however, the Klingon ship picks up a planetwide distress call, as the planet itself is under attack from a massive unrecognized ship sending an incomprehensible signal. The Enterprise crew discovers that the signal is in actuality humpback whale song.

Since the humpback whale has been extinct on planet Earth for centuries, Kirk & Co. decide that the best course of action would be to attempt time-travel in order to procure some 20th-century whales. Upon arriving in 1980s Earth, the crew gets to work on various tasks that will allow them to build a massive aquarium within the Klingon ship, transport a whale or two on board and regenerate the ship’s spent energy supply.

Assisting Kirk and the still-wonky Spock is Dr. Gillian Taylor, a Sea World employee who, after some convincing, ultimately scores two whales for the 23rd century. The crew succeeds in their mission and returns to their time. Apparently mollified by a brief exchange with the whales, the alien ship ceases its meteorological attack on Earth and heads back out to the stars.

After a hearing at Starfleet, Kirk is “chastised” by Starfleet officials and is “punished” with a reduction in rank to captain, which will allow him to command a Federation starship once again.

Quite a few of the better Star Trek movies involve the characters breaking into groups and each setting about to accomplishing some task; think Star Trek: First Contact and Star Trek Beyond in addition to The Voyage Home. Such a choice allows each player the potential for rich character development through dialogue and, more importantly, *something to do*. In Star Trek IV, nearly every character gets more than one funny bit and each actor sells his/her bit; particularly amazing are James Doohan as Scott and Deforrest Kelley as Bones.

Given a chance to shine, Doohan and Kelley pull off one good gag after another, some as much comic timing as do their characters callous disregard for time paradoxes. These two are so good, it makes one regret the opportunities lost to give more screen time to Scotty in particular.

Have we mentioned the freakin’ hilarious one-liners? Those who have seen the film can’t help but chuckle at stuff like:

“I think he took a little too much LDS…”

“Well, double dumbass on you.”

“The hell they did.”

“Don’t bury yourself in the part.”

And that list doesn’t even include some hilarious exchanges between principals or contributions from extras. “I think he’s talking to that man.” Bwah ha ha haaaaa!

Of course, nothing’s perfect, right? The time travel plot device is a bit too convenient and easily achieved (not to mention the actual time-travel sequence is … what the hell *is* this, actually?) and Karen Gillan is clearly often under-directed (read: bad) as Dr. Tyalor, though this is noticeable because often she’s incredibly natural and dead-on in character.

An innovative script can cure more cinematic ills, and The Voyage Home’s script is innovative in boldly taking these beloved characters to places they’ve not been before. In zigging where the zag was expected, Star Trek IV shows a confidence in franchise and material that several movies in the series – we’re thinking I, IX, X, XI and XII specifically here – do not.

Star Trek IV: The Voyage Home was released in November 1986; 10 months later, Star Trek: The Next Generation would debut on American TV. ST IV thus not only excellently wraps a self-contained trilogy of films, The Voyage Home represents an early peak within what should be considered the Golden Age of Star Trek (1982-1999).