Star Trek: Nemesis -- The TNG crew's final journey is its most unwatchable 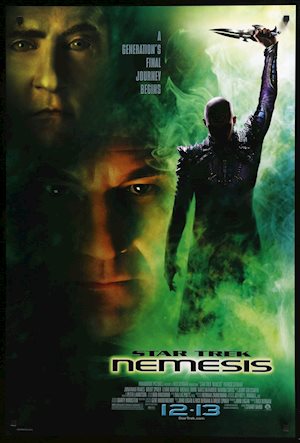 Back in the day when Star Trek movie titles still included Roman numerals, the time-honored belief on the films was “odd-numbered bad, even-numbered good.” But combined with Star Trek V: The Final Frontier, Star Trek X, a.k.a. Star Trek: Nemesis, proves that every fifth film in this series has the potential to be a franchise-stifler. Here’s to thinking that producers of Star Trek XIV, tentatively figured for a 2019 release, should definitely consider just flat out sending Pine, Qunito, Pegg et al to heroic deaths so as to avoid the curse of the fifth…

A debate on Romulus is raging: A rebellion is being waged against the Romulans by their brother (and heretofore unmentioned) race, the Remans. Amid this debate, a number of senators unsympathetic to the Reman cause are assassinated.

In another part of the quadrant, the Enterprise picks up traces of positronic energy, thought to be unique to Commander Data’s android brain, on the planet Kolarus III. On said planet, the Enterprise away team of Data, Captain Picard and Commander Worf find a disassembled android nearly identical to Data which, when reactivated aboard the Enterprise, identifies itself as B-4.

Picard is shortly thereafter contacted by Admiral Kathryn Janeway (spoilers: Voyager returns to Earth in less than 70 years), who directs the Enterpirse to Romulus for a diplomatic meeting: As it turns out, the new leader of Romulus by coup, one Shinzon of Remus, seeks to sign a peace treaty with the Federation.

Once the Enterprise arrives at Romulus, Shinzon explains that he is in fact a clone of Picard (sigh), engineered from birth to act as a spy within the Federation. This rather silly program was abandoned, however, and Shinzon was sent to work in the Reman mines, from where he ultimately became rebel leader tooling around in the starship Scimitar.

Shinzon abducts Picard along with the B-4 android that he’d planted for the Enterprise to find. As Dr. Crusher has already discovered, Picard’s blood will assist Shinzon in holding back his aging process, which is out of control. Data reveals that he was posing as the identical B-4 (you’d think Shinzon might’ve thought of that, but hey) and the two escape. As they’ve learned that Shinzon plans to use an ultra-powerful radiation gun on Earth, Picard commands the ship to head back to Federation space.

A battle ensues, pitting the Enterprise and two Romulan warships against the Scimitar. The Scimitar makes short work of the Romulan ships, however. Picard, in an effort to be unpredictable, decides to ram the Enterprise into the Scimitar. (Really, man?) And it all ends badly. Picard fights Shinzon on the bridge of the Scimiar and kills him. Data transports Picard off the Scimitar and destroys the Reman ship, himself killed in the resultant explosion.

The Enterprise somehow returns to Earth for repairs. B-4 had received downloads into his positronic brain before Data was destroyed and is slowly becoming more like Data.

It is said that Nemesis director Stuart Baird hadn’t seen a single episode of Star Trek: The Next Generation before beginning production on Nemesis. No kidding. All the major players feel flat in characterization and few are given anything interesting to do. The DVD includes a good 15 to 20 minutes’ worth of finished footage scrapped from the film’s final cut, essentially all character-centric and filled with little bits that would have stayed in a Jonathan Frakes production.

Instead, Baird includes frivolous, superfluous action sequences such as the dune-buggy chase on some alien planet, that don’t belong in any ST movie, much less one turning on intricacies of Romulan politics. (Incidentally, let’s coin this rule of science-fiction movies: If a science-fiction movie includes any sort of parliamentary politics, it sucks; cf. The Phantom Menace.) The ho-hum starship battles lead up to nothing more than the most inelegant solution to a ST story since Kirk was fistfighting lizard men.

As for the Data subplot, this was reportedly dreamed up by Brent Spiner for reasons. As with Star Trek V, the writing of the script was delayed thanks to a writer’s strike (hmm, interesting coincidence, that) and apparently Spiner’s original intent was lost because nothing involving Data or the so-called B-4 in Nemesis make one whit of sense. From Shinzon dumping the head as bait for Picard to the convenience of B-4’s *never having been freaking ever meaning on anywhere in ST canon*. So kinda like Spock’s half-brother in Star Trek V – hmm, interesting coincidence, that.

And speaking strictly purely popcorn-munchingly pragmatically, why is this film so incredibly dark? Was J.J. Abrams overcompensating for the look of Nemesis when overloading Star Trek XI with his infamous lens flares seven years later?

What’s even sadder is that the potential for material is massive. Again, what happened to that line about “the Federation challenged by every major power in the quadrant”? After seven years’ worth of Cardassian storyline development on Deep Space Nine, why not feature those guys in a flick? Or why not bring back Data’s evil twin Lore and give Brent Spiner all the screen time? Or go back to the Klingons, who kicked ass in Star Treks III, VI and VII?

How do you nearly kill an entertainment franchise that’s pumped out nine films and 26 seasons’ worth of television episodes? With films like this.