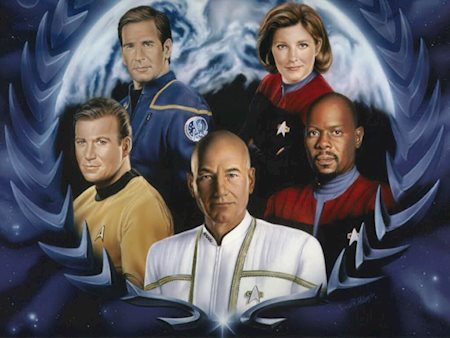 Officially, this 2011 documentary is called “The Captains,” but Star Trek Guide is taking an editorial stance here; simply put, “Star Trek: The Captains” is a much better name. Written and directed by William Shatner, the Captains is a nice labor of love nearly good enough to forgive ol’ Kirk for Star Trek V. It’s a rambling, scattershot approach to documentary filmmaking, but certainly one for fans to enjoy – just make sure the tolderance for William Shatner and self-reflection is high…

The Captains focuses on each of the (then, to date) five actors who’d played the lead role in a Star Trek. Chronologically, as Shatner points out early in the proceedings, that’s Shatner himself, Patrick Stewart, Avery Brooks, Kate Mulgrew, Scott Bakula and Chris Pine.

Happily, Shatner avoids the easy out in presenting the material, i.e. to simply present each actor’s biographical highlights in straight A-to-Z fashion. The Captains instead follows one heck of a meandering path topically and geographically, from the essence of acting to job stresses on personal lives to whatever Avery Brooks is riffing about, from New Jersey to England to New York City to Ontario to Las Vegas. If this is, as Shatner describes in the intro, “a journey of discovery. by me, you, and ultimately by them,” it’s one heck of a meandering one.

By the Captains’ conclusion, writer/director Shatner appears to learn something about his own attitude toward playing the iconic Star Trek captain – in a conversation with Stewart near the end of the film, Shatner just about sets the world record for “longest question ever asked” in which he “explains” this revelation – but Star Trek Guide wouldn’t blame you for simply enjoying a quintet of actors we as fans all dig on.

The Captains often threatens to descend into Shatner’s self-described, not quite self-effacing “old man reminiscing” because more than anything, this documentary ends up as self-examination of the dude who played Kirk (the first time around). A high proportion of conversations are brought back to personal experience and, when seeking a new direction for questioning, descends into pretentious college freshman-level stuff like “What happens after we die?”

Happily, the Captains doesn’t plumb these depths too often. Clips from TV episodes and movies as well as neat cameos from the likes of William Frakes, Robert Picardo, Nana Visitor and Shatner’s buddy Christopher Plummer keep things from getting bogged down in Shatner’s self-examination. A few minutes are devoted to Shatner’s appearance at a Star Trek convention, including something of a standup routine composed of material sculpted during filming “The Captains” – oooh, meta!

As for the principals, scheduling and pragmatism naturally lead to some given more screen time than others. Stewart earns himself the most quality minutes, as well as the film’s emotional highlights as he recounts the regret at dissolution of two marriages. Mulgrew tells of her youthful deception which led to her acting career, while Bakula predictably comes off as the nicest, most down-to-Earth, science fiction-loving of the lot.

And then there’s Avery Brooks. One cannot possibly come away from The Captains without equal parts admiration and ‘WTF’ery for Brooks, a dude who apparently thinks in beat poetry. In his convention comedy routine, Shatner laughs the professor off as – sorry – spacey, but he’s probably just miffed that Brooks trolled him so hard. Brooks dodges Shatner’s attempts to get heavy, to control the dialogue and to speak of Earthly matters that a wiser man disregards. It’s all very frustrating for Shatner, but leaves audiences wondering if Brooks actually literally become an ethereal spirit in the celestial temple at the end of the Star Trek: Deep Space Nine run.

So yeah, much of the Captains (like captaining the Enterprise, as implied by Stewart) lies in the Shatner’s shadow. But these familiar faces and personalities together help make for a dandy, if sometimes uneven, collection of all-original material guaranteed to feature any fan’s particular favorite. Seriously, Star Trek Guide guarantees that, no matter how many conventions you’ve attended and fan news you’ve read, something new, surprising, weird (especially with Brooks) and/or touching awaits in Star Trek: The Captains.

Like the best of the Star Trek franchise itself, in the Captains, the small bits, the personal reflections make the movie. Taking this half-dozen folks (we’re including Shatner here) out of Star Trek trappings pretty much makes the film – flaws, rough patches and all – required viewing for fans.