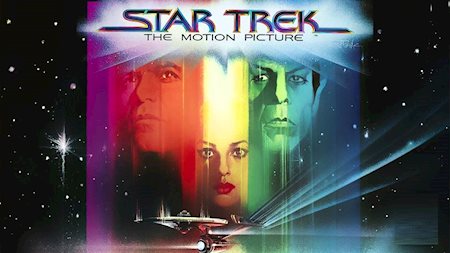 In the 1970s, the continued success of the Star Trek TV series combined with the overwhelming popularity of Star Wars and Close Encounters of the Third Kind, Paramount took an unprecedented gamble by breaking Gene Roddenberry, the cast and crew of the original series out of mothballs and giving them a big-budget movie production.

A few things changed in order to make things more cinematic: Gone were the uniforms of primary colors and black; in came pajama-looking unis which were probably reckoned as an evolution of 1960s astronaut gear. Two new characters are added to the mix in Captain Willard Decker, now captain of the retooled Enterprise and the navigator Ilia, the ST universe’s first Betazoid character.

A massive and mysterious cloud is crossing the galaxy at high speeds, exterminating anything foolish enough to get in its inexorable path toward Earth. One the cloud enters Federation space, the Enterprise is the sole starship within intercepting range (a plot device which drives several of the movies) and is thus sent to investigate.

Admiral Kirk takes the helm of the Enterprise and has Deckard bumped to first officer. Lt. Commander Spock rejoins the crew after receiving visions from an intelligence within the cloud. The Enterprise explores the strange new cloud, to discover that the entire formation is an extension of the tiny space probe Voyager. Voyager, or V-ger as it knows itself, has somehow gained sentience and seeks answers from its creator. Deckard and Ilia ultimately make the proverbial Ultimate Sacrifice, Earth is saved, and the Enterprise crew continues its star trek…

Critical analysis of Star Trek: The Motion Picture generally focuses on the pacing and the intelligence of the script. And sure, 40 years later, this is one heckuva meandering film. Various histories of the making of ST:TMP attest to last-minute rewrites and editing to what would-be the final cut, and this micromanagement and lack of polish are evident in more than one sequence of the film. Spock’s spacewalk is more or less without motivation, and much extraneous screen time is given to Kirk for no reason other than actor ego.

Speaking of actor egos, much has been written/discussed about essentially ever cast member’s complaints about the script vis-à-vis character development – and you have to take the actors’ side here. Every single major player on the Enterprise crew comes off as flat, every actor playing an archetype. Heck, Deckard and Ilia come off as substantially more rounded than any of the regulars – Is this film secretly about the Red Shirts of Star Trek lore?

And as STTMP was shaped in the blockbuster template, so too was the film’s style dictated by Hollywood dogma. Setting a multi-million dollar flick in space required the director to go in trippy mega-epic direction of 2001: A Space Odyssey or the fun shoot-‘em-up style of Star Wars. It would take, ironically, the ejection of Gene Roddenberry from the creative team to find a third way, i.e. the *Star Trek way* The result is a lot of lingering shots over the vastness of space and a classic vagueish ending; unfortunately, Robert Wise and Harold Livingston are not Stanley Kubrick and Arthur C. Clarke, respectively, and thus the deus ex machina conclusion here leaves audiences saying “huh?” rather than “whoa.”

In the plus column, ST:TMP definitely earns some points for an interesting antagonist. Though the “insane god” is a well-worn ST:TOS trope – which we’d see again in the execrable Star Trek V – the then-topicality of solar system exploration reflects the original series’ proclivity for commenting on contemporary issue, casting them in a scintillating science-fiction light. And finally, the fate of Earth/the galaxy/the universe doesn’t come down to Kirk in fistfight (as in Treks III and VII and about 75% of TOS episodes)!

For Star Trek fans, time has helped Star Trek: The Motion Picture. Even though the pacing seems ever more ass-draggingly slow, any gaps in script, continuity and/or character development may now simply be retconned, and the movie considered another of the voyages of the Star Trek Enterprise.