Star Trek V: The Final Frontier -- What does Shatner need with a director? 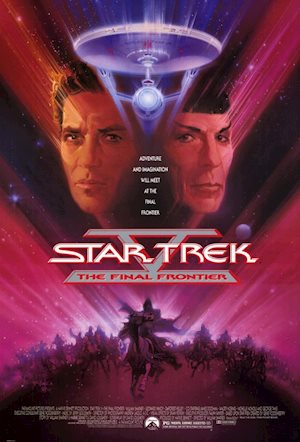 “What does God want with a starship?”

Now that we’ve gotten the best worst bit (or what is the worst best bit?) of Star Trek V: The Final Frontier out of the way, Star Trek Guide can continue with the writeup. And on the off-chance that you haven’t heard, the fifth movie installment in the ST franchise just isn’t that good at all. In fact, probably the most positive spin we can put on The Final Frontier is to accept it as the necessary price to pay for its far (far!) superior predecessor, The Voyage Home.

Knowing that his James T. Kirk would be essential to Star Trek IV, William Shatner held out for as favorable a contract as possible – no dunny he! – ultimately collecting a nice paycheck as well as the director’s chair for Star Trek V. Shatner also put forth his story idea for the script, which can ultimately be blamed on many of the unbaked final product’s problems: At various points in the production process, franchise creator/overseer Gene Roddenberry, producer Harve Bennett and co-stars Leonard Nimoy and DeForrest Kelley all registered complaints about the story and/or script. On top of this came a writer’s strike and, when scriptwriter David Loughery returned from the picket lines, a near-complete rewrite was undertaken.

Tweaks to script and special effects were, as in the production of Star Trek: The Motion Picture, continual and constant on Star Trek V: The Final Frontier. But in the end, no sure fire trick-in-the-book could have saved this movie from its very silly premise...

Shore leave for the senior officers (all except Montgomery Scott and Commander Uhura, it seems) is interrupted by the report of a hostage situation on Nimbus III, a world known as the “peace planet” for its equal rule among Romulans, Klingons and Earthlings. A Vulcan named Sybok and some members of his Galactic Army of Light have taken three ambassadors hostage and are demanding an audience with any of the powers that be. Kirk replies that he’s bringing the Enterprise, and this signal is picked up by Klaa, captain of a Klingon warship who reckons he can take an opportunity to ambush Kirk’s ship and destroy him.

The Enterprise arrives at Nimbus III before the other responders. Kirk decides to take action immediately by deploying an away team to free the hostages. After some time is pent actually getting to the hostages – transporter malfunctioned, had to put them far from the target, etc. – the team finally gets to the room in which the Galactic Army in holding the hostages … only to find that the ambassadors are part of a plan to capture a Federation starship.

Sybok reveals himself and soon thereafter comes the revelation that Sybok is in fact Spock’s half-brother (sigh). The Vulcan group rounds up the Enterprise crew on the planet and all get into the shuttlecraft to get back to the Enterprise. Klaa’s ship appears and engages in a brief skirmish with the Enterprise before the latter departs. Once aboard, Sybok throws Kirk and Spock in the brig and takes control on the ship. A course is set for the thought-to-be mythical planet Sha Ka Ree upon which, he and his followers believe, God resides.

After a demonstration of Sybok’s well-honed mindmelding abilities, the Enterprise nears what Sybok & Co. believe is the Great Barrier. The Enterprise gets through this phenomenon. Sybok, Kirk, McCoy and Spock take a shuttle down to the planet’s surface, whereupon they converse with a giant omniscient-appearing head.

It soon becomes apparent that the being is more akin to an imprisoned cosmic psychopath than God. Kirk drops the starship line, which convinces the believers Sybok and McCoy on his distinctly non-godly nature. Sybok stalls the “god” while a photon torpedo – this despite another attack from Klaa – assists in the Enterprise trio’s getaway. Not only did they get away in a classic meme of the film series close-calls, true fans won’t even miss ‘the rock man’ who for whatever reason just didn’t jibe with the showdown with both Kirk and God.

And they end up in Colorado again.

Hoo boy, this isn’t good, from the earliest, with Kirk/Spock/McCoy’s inane hanging out in (including Kirk scaling a mountain face without equipment) to the surprise revelations which are only surprising in their outrageousness to the overwrought “greatest fear” sequences … ugh. If you’ve seen Star Trek V: The Final Frontier already, you know not to see it again. Luckily, despite a fearful few, Star Trek VI managed to breathe life back into the film series after this flick nearly dealt the death blow to the cinematic future of Kirk and the Gang.

As for Shatner, the sole feature film he ever directed after The Final Frontier? Check out a little film produced in 2002 called Groom Lake (or don’t).