Star Trek VI: The Undiscovered Country -- Like Shakespearean drama in the original Klingon 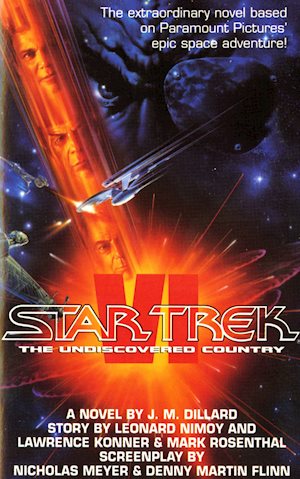 To Star Trek Guide, the fans’ love for Star Trek VI: The Undiscovered Country has always been a bit baffling. Sure, it’s a decent enough sendoff for the cast and crew of the Starship Enterprise (though Kirk, Spock, McCoy, Scotty and Chekov would all make appearances in either Star Trek VII or one of the “second generation” TV series) while also formally launching the entire Star Trek universe into the new paradigm of Klingon-Federation alliance.

Fair enough, but next time you’re hankering for a Star Trek flick, turn on ST VI and prepare to be surprised at the incredibly slow pace, general lack of plot and non-existent twist…

Star Trek VI begins with a literal bang, as most of the moon of Kronos, the Klingon home world, is destroyed in a massive explosion. Caught up in the blast is Captain Sulu and his Federation starship Excelsior. Due to the disaster, the Klingons seek to broker a peace deal with the Federation.

Captain Kirk and the Enterprise are selected to escort Klingon chancellor Gorkon to Earth to negotiate said peace treaty. During their travels, a pair of photon torpedoes are launched from the Enterprise, disabling the Klingon vessel and killing Gorkon, despite Dr. McCoy’s best efforts to save him. Kirk and McCoy are put on trial, speedily convicted and sent to a forced labor camp.

In the meantime, Spock has assumed control of the Enterprise and begins unraveling a conspiracy of Klingons, humans and Romulans – including one member of the bridge crew – who seek to derail the peace process. General Chang, Gorkon’s second-in-command who rose to position of chancellor with the former leader’s assassination, is shown to be the perpetrator of the crime and ringleader of the conspiracy. A combined effort from the Enterprise and Excelsior defeats Chang and peace talks are resumed.

Any plot summary certainly makes Star Trek VI sound like an action-packed thrill ride, but the reality is a heck of a lot different. Conspiracy theories and peace negotiations don’t typically make for thrilling science-fiction romps – heck, this plotline would seem a lot more in step with the ST ethos had it been a Next Generation script.

Indeed, the snail’s pace of a plot is only furthered by plot conveniences and red herrings that a Power Rangers script. Examples? Sure! First off: So the bloodlusty Klingons agree to put James T. Kirk, Klingon public enemy no. 1, on trial…? This is a race who justifies revenge killing as fair justice for a crime of passion, never mind political assassination. Not only this, but the trial appears to be arranged, settled and decided in less than a day; Kirk and McCoy spend perhaps another 24 hours in the penal facility before a shapeshifting alien befriends them and provides them an easy escape – not at all suspicious.

Worst of all is the revelation and subsequent “mystery” uncovered by Spock about halfway through the film. We’re told that one of the conspirators in Gorkon’s assassination is a member of the bridge crew. Okay, so with Sulu commanding his own ship plus Kirk and McCoy in jail, that means the list of possible baddies would have to include Spock himself, Scotty, Uhura, Chekov … or Spock’s latest protégé Valeris. Gee, um, I think it’s Uhura!

None of this is to say that The Undiscovered Country is bad per se, particularly for fans of the franchise. This sixth installment is the necessary bridge between the original series and the universe of Star Trek: The Next Generation. And unlike Star Trek: The Motion Picture, the script of Star Trek VI is hardly overwritten, characterizations are consistent and the special effects look appropriately, well, Star Trek-like.

For the casual fan, however, the principal problem is that this episode comes off as mainly serving the function of advancing the Star Trek mythos rather than presenting an individual, standalone film. As deeply set in the mythos as Star Trek VI is, nearly everything in this film is more greatly enhanced by knowledge of the Star Trek series. As opposed to movies like Star Trek II or Star Trek: First Contact, two films directly based on their respective spunoff TV series, deep knowledge of the show will necessarily lead to a greater appreciation of the film.

So Star Trek VI: The Undiscovered Country may not have been the greatest sendoff for the Enterprise crew, but at least it’s no Nemesis…