Essentially a continuation of the original series, the Animated Series was a direct result of the ever-increasing rabid fandom of essentially the first-ever cult TV show. The animation studio Filmation, who’d later become known for its Super Friends and He-Man series, brought back the original cast (well, most of them, anyway; more on this momentarily) together with Gene Roddenberry to produce a run of 12 shows for Saturday morning broadcast in 1973-74.

Every episode of Star Trek: The Animated Series’ first season was directed by Hal Sutherland, and this work represented some of the animation legend’s last work before his semi-retirement in 1974. Sutherland directed one crazy mix of scripts which includes three sequels, Larry Niven’s adaptation of his own short story, and the nutty one turned in by Walter Koenig, a.k.a. Chekhov.

1. Beyond the Farthest Star – Not much of a premiere episode, the first TAS story to air is a fairly straightforward tale continuing on from The Original Series. The Enterprise finds itself trapped in orbit around a dying sun along with a 300 million-year-old (!) ship with includes a message warning of an Insane God! (Or at least an Insane Entity!) Kirk thinks forward to Star Trek IV: The Voyage Home and connives an escape. ***

2. Yesteryear – With a script from the Star Trek’s franchise’s most prolific writer through 1990, D.C. Fontana, this episode explores familiar territory, i.e. Spock’s back story. “Yesteryear” has Kirk and Spock revisit the Guardian of Forever, only to find that Spock’s past has changed, resulting in his death as a young man. He time-travels though the Guardian’s portal back to the Vulcan of his youth. Sarek appears in this episode, making him the only non-regular to appear in TSO, TAS and TNG. (Not to mention a couple of the movies…) ***

3. One of Our Planets Is Missing – How come the original series never had titles like this? Particularly because this is yet another in the long series of Cloud Beings exterminating lifeforms willy-nilly … **

4. The Lorelei Signal – Right, now here’s a grab bag of Star Trek tropes: A planet of hot (albeit animated) babes are space vampires, stealing the “life essence” of the available males. And in the meantime, said essence-losing males … age really quickly! Minus points for clichés, but we’ll tack ‘em right back on for that day-saving away team led by (who else?) Uhura and Nurse Chapel. *** 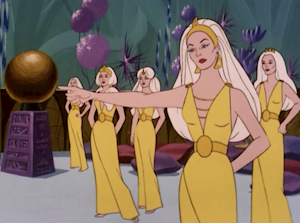 5. More Tribbles, More Troubles – The weakest of three Tribble-centric ST episodes, but hey, tribbles! In part two of what is essentially a trilogy, Cyrano Jones is back as the Tribble merchant (apparently, he’s cleaned up the proto-Deep Space Nine station); he’s on the run from Klingons and also hawking a new form of Tribble which is essentially neutered. ****

6. The Survivor – Noted Federation philanthropist Carter Winston (voiced by Ted Knight. yippee!) is found after having disappeared five years previously. Naturally, ol’ Carter is … not as he seems! Gene Roddenberry gets co-scriptwriter credit, so “The Survivor” is pure classic Trek. ***

8. The Magicks of Megas-tu – A dude named Lucien hijacks the Enterprise and brings the crew to Megas-tu, a planet where magic supersedes technology. The folks there seek to put the crew (including Spock, for some reason) on trial for incidents in 1691 Salem. An interesting mix of fantasy or science-fiction that quite frankly no other Star Trek could have pulled off; probably the peak of The Animated Series. ****

9. Once Upon a Planet – The Enterprise revisits the planet of “Shore Leave”, where they find an Insane Computer! in charge. Incredibly slow-moving stuff for The Animated Series. **

10. Mudd’s Passion – Harry Mudd, having escaped his planet of androids, is now wanted by the Federation. His “love potion” is soon wreaking havoc on the Enterprise, causing, ahem, tension between, for example, M’Ress and Scotty, Spock and Nurse Chapel and … Spock and kirk. (Yes, they did.) ***

11. The Terratin Incident – The Enterprise answers a mysterious signal. When near the planet, the ship’s crewmembers immediately experience full-body shrinkage because of (sigh) radiation from a supernova. And somehow the magic transporter fixes everything. *

12. The Time Trap – The Enterprise is attacked by a handful of Klingon ships. Soon, the Enterprise finds itself sucked into a pocket dimension containing innumerable starships. An entire multispecies culture has evolved within the dimension, but Kirk et al have no time to explore that strange new world. Captain Kor of the Klingon ship, incidentally, would become the first non-series regular to appear on TOS, TAS and Deep Space Nine. ****

13. The Ambergris Element – Water-dwelling beings genetically manipulate Kirk and Spock so as to make them water-breathers. This condition can apparently only be reversed with a batch of fresh venom from the bigass “sur-snake.” So, yeah. **

14. The Slaver Weapon – Science-fiction great Larry Niven’s contribution to the Star Trek machine has Spock, Uhura and Sulu discovering powerful technology of an ancient race known as “The Slavers.” Naturally, a more malevolent force discovers the technology … To date, this remains the sole episode of any Star Trek series which does not include its lead character. ****

15. The Eye of the Beholder – A scientific team and a Federation starship crew go missing in orbit around Lactra VII. The Enterprise crew follows, only to be imprisoned in an alien zoo by massive, telepathic slug-like creatures. And poor Scotty winds up as a plaything for a Lactra child. ***

16. The Jihad – Here’s to thinking that “Star Trek: Discovery” wont’ have a like-titled episode at any point in its run. The particular holt war referred to in the title is all about the theft of a religious artifact, a crime which could trigger an interplanetary war. Kirk and Spock join a quartet of investigations, each conveniently of a different phylum: We’ve got the avian, insectoid and reptilian aliens along with a good old humanoid. ***