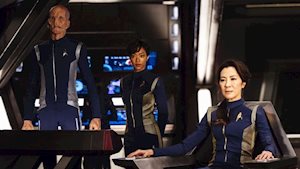 In its return to the small screen, the Star Trek franchise-runners were certainly motivated to update the new series to modern expectations – not to mention special effects. Star Trek: Discovery is marked by its thick continuity, dozens of major roles and deaths aplenty. (By STG’s count, some six major characters die at least temporarily in the first nine episodes od Discovery season 1 alone. Those ain’t Game of Thrones-level numbers, but considering that a single death in Star Trek is rattling – think Jadzia Dax, Tasha Yar or even Dr. McKennah – a half-dozen kills is positively over the top.)

The result was a season that Star Trek fans and science-fiction hardcores loved, but was likely a tad too geeky for the mainstream viewer. Two things, though: Despite its too-heavy reliance on complex story lines, it’s till the best season 1 of any ST series yet. And damn, those effects are awesome.

1.The Vulcan Hello. Welcome aboard the starship USS … Shenzhou? In an early deviation from the ST norm, Discovery’s first two episodes are a prologue of sorts telling of the rise and fall of promising former First Officer Michael Burnham. In this debut episode, Captain Georgiou (the Picard to Burnham’s Riker) urges her longtime Number One to take command of her own vessel. The personal story soon takes a backseat, however, when a number of Klingon ships advance on Federation territory.

Adding to the differences in Discovery may be added the amount of screen time given to a cadre of Klingon characters; at center is T’Kuvma, the ambitious reported inventor of cloaking technology. He seeks to unite the squabbling houses within the Klingon Empire in the fashion of the great hero Kahless. Naturally, not all of his would-be comrades see T’Kuvma as the proper leader for such a consolidation of power…***

2. Battle at the Binary Stars. Burnham’s attempt at mutiny, so as to take over the Shenzhou and respond to the Klingons as she’d been taught from Vulcan history, proves short-lived. However, Georgiou concocts an alternate plan which doesn’t go quite as successfully as planned. Suffice to say, a war is triggered and Burnham, at the speed of warp, becomes a pariah throughout the Federation. ****

3. Context is for Kings. Amid a bunch of generally pretty silly episode titles, “Context is for Kings” is king. After Discovery rescues Burnham’s prison transport ship from disaster, ship’s captain Gabriel Lorca employs Burnham to contribute to a “scientific” assignment which involves the subduing of a interstellar beastie big and bad enough to crush a shipful of Klingons. Impressed with her skills mentally and physically – Commander Landry oversees a “minor incident” involving another prisoner in what may or ay not have been a test – enough to grant her a temporary commission aboard Discovery. ***

4. The Butcher's Knife Cares not for the Lamb’s Cry. See what STG was saying (writing?) about episode titles? In this lengthily-named episode, Burnham and Lt. Stamets are ordered to implement a “spore drive” engine system which depends on living matter, i.e. the “Tardigrade” captured in the previous episode. (Sheesh, did none of these guys see the Voyager episode “Equinox”? Bad stuff happens when you do this…) Discovery employs the drive and successfully defends a Federation colony from a Klingon attack. ***

5. Choose Your Pain. Harry Mudd returns to the Star Trek universe … or rather is introduced into the … reintroduced? Damn, prequels are tough on grammar…

In any case, Lorca is captured by Klingons and imprisoned along with one Lt. Ash Tyler and the infamous swindler Mudd. After several rounds of the Klingon game “Choose Your Pain,” i.e. at torture o’clock, a random prisoner must choose who will get the Klingon workover. With the Tardigrade dying, Burnham, Stamets and Dr. Hugh Culbert must figure a way to work the spore drive without, in order to rescue the captain. Stamets replaces the creature and thus begins a slow David Bowman-like descent into groovy madness… ***

6. Lethe. Sarek’s ship is attacked by terrorists, and he’s left nearly dead aboard his ship. Burnahm, who is in deep mental-spiritual contact with her adopted father, convinces Lorca to let her go on a rescue mission. Together with new crewmate Tyler and Cadet Sylvia Tilly, they manage to maneuver closely enough to Sarek’s trapped ship so that Burnham can overcome his Matrix-like mental defenses, metaphorically slap him back into consciousness, and learn a bit about her past. ***

7. Magic to Make the Sanest Man Go Mad. Head trip for Burnham? Time paradox? The return of [redacted for spoilers]? Awesome. This is Discovery’s version of The Next Generation’s “Cause and Effect” and damn if it doesn’t feel enough like TNG to half-expect Commander Data to report on his level-3 diagnostic. Any ST fans not won over to Discovery by this episode lost their senses of humor probably sometime during season 3 of Enterprise. (Like so many of us did.) *****

8. Si Vis Pacem, Para Bellum. Since the universal translator apparently didn’t work on this episode title, STG can tell you it’s “If you want peace, prepare for war.” In Star Trek: Discovery’s first proper away-mission episode, Burnham, Tyler and Saru are sent to investigate an apparently natural phenomenon capable of broadcasting radio waves on a massive scale. Everything goes swimmingly until “new life” is found on the planet – and Saru’s behavior becomes disturbing for reasons we don’t learn until season 2 in “The Sound of Thunder”. ***

9. Into the Forest I Go. Many (many, not all) of season 1 storylines come to a head (not necessarily resolved, mind you) in episode 9. Among the story threads at play here are Admiral Cornwell’s fate, the future use of the spore drive, the discord among Klingons and Burnham’s personal road to redemption. Lorca finally – finally – gets to unleash his inner badass in a firefight with the Klingons and Lt. Stamets comes away as more of a hero than ever.

10. Despite Yourself. The Discovery crew rapidly surmises they’re in a parallel universe and adapts accordingly. Tilly is fascinated to find out that she’s worked/killed her way up to captain already, and she bears the nickname Captain Killy. Burnham and Lorca get aboard the ISS Shenzhou, where the plan is for Burnham to reassume his counterpart’s command of the ship, passing Lorca off as her captive. Oh, and at the very moment when Dr. Culber starts acting like a proper Starfleet doctor, Tyler ices him, either due to his EEEEvil Klingon impulses or his sheer boredom of the character. ***

11. The Wolf Inside. Burnham and Tyler undertake a mission to destroy a rebel camp; among the rebels are Mirror-Universe versions of Sarek and Voq; upon seeing Voq, the penny finally drops for Tyler and he remembers all, nearly blowing Burnham’s chances at helping the rebels. Despite Burnham’s attempts to convince them to flee, they are wiped out from the air via the starship ISS Charon commanded by the Emperor of Earth, one Philippa Georgiou. ****

12. Vaulting Ambition. Onboard the Discovery, Stamets finally recovers – but not before he has a very trippy encounter with his mirror-universe counterpart within the mycelial network. Lorca’s true identity is revealed – though, again, guessed by most fans beforehand – after a long series of carefully maneuvered-through chatter between Georgiou and Burnham, in which the latter reveals the nature of the Prime Universe. Lorca escapes and kills his jailer…***

13. What's Past is Prologue. Lorca begins freeing his Mirror-Universe compatriots, including Commander Landry (Remember her?). Lots of cat-and-mouse – then deaths – ensue, but the Emperor is nevertheless overthrown. Burnham at the last second saves Georgiou’s life and both are aboard the Enterprise as Stamets pilots the spore-driven Discovery through some incredibly risky maneuvers to get back to the home universe – only for the crew to discover (sorry) that they’ve arrived nine months after they left and the war, as Jean-Luc Picard once said, is going badly for the Federation…***

14. The War Without, the War Within. Georgiou’s reappearance causes quite a stir among the Discovery crew, as does the news of Mirror-Universe Lorca to the now-aboard Admiral Cornwall. Cornwall, Sarek, Burnham and the rest are soon back to business, however. Unfortunately, they arrive too late at 1, finding only the destroyed base marked with the insignia of a Klingon house and left with a whopping 80,000 dead. What’s more, a Klingon fleet is heading straight for Earth and conquest. An offensive is planned with the help of Georgiou: Spore jump *into* Qo’Nos, the Klingon home planet. ***

15. Will You Take My Hand? Georgiou is given command of the Discovery, and her first stop takes them to an Orion outpost. Georgiou, Burnham and Tilly hit the black market in search of drone weaponry to map the surface of Qo’Nos, while the Discovery heads for that planet itself. The three appear to procure such a weapon, but Tilly discovers that Georgiou has instead gotten a hydrobomb capable of destroying an entire planet. So Burnham gives the bomb to L’Rell, who may use it to unite the Klingons’ warring houses. The war ends, various Discovery crew members get awards for valor and/or promotions, and they’re soon out there, responding to distress calls again – the first from Captain Christopher Pike of the USS Enterprise… ****