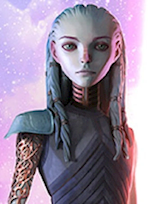 Star Trek: Prodigy is months away from its debut on tv and/or stream and already the series is surprising us. Among the many Star Trek luminaries participating in the Paramount+-sponsored First Contact Day info dump online was Kate Mulgrew, who spilled a couple critical and quite interesting details about Prodigy – little having to do with her Admiral Janeway…

Said Mulgrew: “Five kids are incarcerated on an obscure planet in an uncharted part of the galaxy. And they escape from their imprisonment, and race across the planet to find a defunct starship buried in the sand of the planet’s surface. They go in and of course the prison guards are coming after them, and they can’t get it up, and the shields won’t run, and the thing won’t go. And suddenly, somebody hits a button and bloop, ‘Hello kids. I see you’re a little bit stuck here. Can I help you out?’ And it’s Captain Janeway, in a holographic form…”

The Trek universe has seen its share of folks who’ve done hard time, even recurring and starring characters like Harry Mudd, Tom Paris and Michael Burnham, but actual prisoners are a fairly rare breed in the mostly tidily-kept Federation of the ST universe.

Star Trek Guide also continues to wonder if the Janeway hologram is a technological upgrade of the Voyager doctor’s Emergency Command Hologram.

And an even bigger question lurks: We already know the alien half-dozen and their “obscure” prison planet are in the Delta Quadrant, perhaps even further Out There than Voyager ever reached. So … how did the Federation ship (which STG still guesses is named Prodigy) get there...?