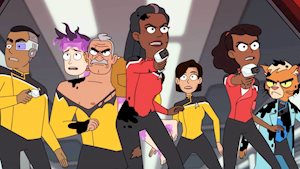 For those who thought Discovery and Picard entered Star Trek lore with particularly strong season 1s, introduce yourself to Lower Decks post haste. For as well-integrated into the ST universe as those series were, Lower Decks is pretty much pure ST goodness from Ensign Boimler’s first “captain’s log” entry.

With sharp wit and great comedic timing (which sometimes descends, admittedly, into gutter humor – but what do you want from a showrunner who cut teeth on Rick & Morty?), Lower Decks sedge-eason 1 comes off as a love letter to everything fans dig about Trek – especially the TNG/DS9/Voyager era. Best of all, the final episodes brings real edge-of-the-seat action, surprising turns, heroism in spades and fist-pumping moments aplenty.