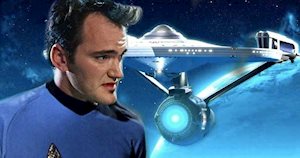 Fair enough, Star Trek Beyond was hardly a box-office bonanza for Paramount: At $158.8 million in total worldwide ticket sales, Beyond garnered nearly *$100 million* less that the 2009 sequel/reboot. However, Hollywood execs must know that a ST movie will always bring sizable audiences to the cinema – and with premiere auteur director Quentin Tarantino having co-written a story and script, what’s known in mass media as “Star Trek 4” should be a no-brainer.

Yet, the story of Star Trek 4 at present is one of contract disputes and pre-production hell. Heading into the 20s, the TV/streaming wing of the franchise is stronger than at any point since The Next Generation was still in its first run, but the future of the ST movie series is in doubt.

Early optimism after Star Trek Beyond

Within a year of the initial announcement, we were told that the major players, including Chris “Steve Trevor” Pine (Kirk), Zachary Quinto (Spock), Karl Urban (McCoy), Simon Pegg (Soctty), Zoe Saldana (Uhura) and John Cho (Sulu) would all be involved in Star Trek 4, then slated for a 2019 release. ST movie franchise overseer J.J. Abrams stated around that time that the Chekhov role would not be recast after Anton Yelchin’s untimely death in a freak accident in June 2016.

Paramount Studios’ press release of July 2016 described the plot thusly: “Chris Pine’s Captain Kirk will cross paths with a man he never had a chance to meet, but whose legacy has haunted him since the day he was born: his father.”

The time travel feel of this synopsis certainly again harkens back to the original Star Trek IV, Pine commented in the August 2016 issue of SFX magazine that he’d like to do a low-action Star Trek film and that he’d be amenable to a Voyage Home-like romp: “Pushing the boundaries would certainly be fun and I love doing comedy. If Simon's behind it...” Unfortunately, Pegg was never linked to scriptwriting Star Trek 4 –a crying shame as Star Trek Beyond was the best ST film in years.

Formally announced in early 2017 was the signing of Chris “Thor” Hemsworth, seemingly to revisit his role as Commander George Kirk, father of James Tiberius, in Star Trek (2009). Hemsworth said at that time that Abrams at least had “an amazing pitch on the whole thing.”

Urban put a slight damper on any rolling enthusiasm, though, when he told ScreenRant.com in July ’17 that nothing to do with the film was remotely firm: “[I]f Paramount greenlights a fourth movie for us, I’ll be there. I love working with those guys and you know the fans love those characters. Yeah. It’d be a blast.”

The crazy news hit in late 2017, as word came out that ol’ Mr. Pulp Fiction had pitched a story for a Star Trek film; Mark L. Smith had begun work on the script. At one point, Paramount execs were brazen enough to suggest that as many as three scripts were then in development. Despite the seemingly incredible opportunity for an all-time great director to take on our beloved franchise, fandom weighed in mostly negatively, worried that excessive violence and language would be the order of the day, as Tarantino had asked Abrams if a script for an R-rated Star Trek film would be permissible.

From the go, this argument has seemed pretty silly. Data’s “Oh shit…” in Star Trek: Generations is one of that film’s verbal gems and a few f-bombs have been dropped in the Discovery TV series with no ill effect to the franchise, young minds or greater society. As for the violence, both Pegg and Urban have heard the long pitch and have reassured than a rating of R would be based on violence, which could be toned down easily without any harm to the material.

Said Pegg in March 2018: “I don't think [Quentin Tarantino has] written an R rated Star Trek script. I think what happened is he went to J.J. [Abrams] with an idea that he's had for a while. I remember he told us about it a long time ago. … He just put it to J.J. and I think J.J.'s just considering putting it into a writing room.” A few months later, Urban enthused about the idea again, calling it “bananas” (in a positive sense). This, incidentally, could make a great title for the movie – Star Trek: Bananas.

Sadly, about midway through ’18, most optimism on all the ST scripts and productions came to a screeching halt. Contract talks with both would-be Kirks – Pine and Hemsworth – went sour and neither actor is currently on board for Star Trek 4. Tarantino meanwhile spent most of 2018 and half of ’19 working on the Brad Pitt/Leonardo di Caprio vehicle Once Upon a Time in Hollywood. News of the 14th Trekfilm subsided to near nothing … until May 2019.

The release date of Once Upon Time is in August 2019. As Tarantino may be the Star Trek films’ only hope, keep fingers crossed and stay tuned for good news this autumn…