Since at least 2009, the Star Trek news cycle inexorably returns to the increasingly banal question of whether Captain Kirk – the William Shatner version, that is – will return to the silver screen.

This week, STG supposes, Inverse’s turn at kicking the dead horse arrived and so the website ran with a story entitled William Shatner Reveals the 1 Way He Would Return to Star Trek as Kirk. The crucial (and much-aggregated) quote from the 89(!)-year-old actor explains, “If they wrote an interesting role and they could explain the 55-year difference I might consider it, but at the moment, I’m really busy and Star Trek is in my past.”

Trek fans’ déjà vu from the Inverse story is absolutely rational. In early June,2020, outlets ran with stories with titles such as William Shatner Says He Would “Love” To Return To Star Trek As Captain Kirk; in such stories, Shatner “revealed” that “If they wrote it and it made reasonable sense then I’d love to [revive Captain Kirk].”

And basically precisely a year prior to that, stories such as Star Trek’s William Shatner reveals If He’d Return as Captain Kirk had ol’ T.J. Hooker asserting that “I certainly would … A well-written thing? I certainly would. Absolutely.”

Chasing up stories such as these is the other seemingly obligatory ST storyline, i.e. that regarding the fate of the fourth “Kelvin Universe” movie. At the end of this week, stories such as Star Trek 4 Reportedly Back On The Table, William Shatner Eyed to Return were running on geek media. Such stories are full of the same nothings that those of its ilk have had forever:

“…the latest report is claiming that Star Trek 4 is now on the table again with a new director at the helm replacing S.J. Clarkson. Not only that, but William Shatner is also reportedly being eyed to fill the legacy role occupied by Leonard Nimoy in the first two movies.”

Gee, guess the We Got This Covered writers didn’t take Shatner’s own line seriously; nor did they notice that Star Trek Beyond included no Nimoy… 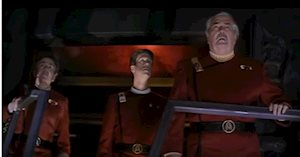 But the real issue is this: It’s been nearly 27 years since Star Trek: Generations and Kirk’s death. Two deaths, really. Okay, two apparent deaths but only one true death and one blasting into a subjective pocket universe sort of phenomenon. The point is: Kirk is dead and the mourning period is over.

STG realizes that this is the realm of science-fiction wherein death has been shown to be impermanent at times. Three Star Trek movies (Search for Spock, The Voyage Home and Generations) are based in part on the concept of bodily resurrection. However, much as we may dismay, ST has also shown repeatedly that death is final – and that this finality gives life its very significance.

In the amazing ST: Picard season 1 finale, Commander Data, who survives only as consciousness within a computer simulation, asks his former captain for release from the mortal coil. “You want to die?” exclaims Picard, to which the profound android denies this, explaining instead that “I want to live, however briefly, knowing that my life is finite. Mortality gives meaning to human life, Captain. Peace, love, friendship. These are precious. Because we know they cannot endure. A butterfly that lives forever is really not a butterfly at all…”

So why not allow Kirk the same dignity? Aside from the desire of media outlets to somehow score a scoop on the Star Trek equivalent of a cold case, the hope for Kirk’s resurrection stems from the same source of “Elvis is Alive” stories: Simply put, humans are often unwilling to accept that their pedestal-set heroes can die in mundane fashion. For the Elvis devotee, it may be easier to accept that one of the world’s most famous people faked his own death and became completely invisible to society save for the occasional visit to a Burger King.

You’d think that such a tendency might not work the same way for fictional characters – again, in the realm wherein death is not necessarily a constant – but fandom itself has steadily changed to this point. In 1893, Sir Arthur Conan Doyle attempted to kill off his famous detective Sherlock Holmes, only for public outrage to erupt, demanding the character’s resurrection. In a 2016 piece for BBC, writer Jennifer Keishin Armstrong notes that readers at the time had previously “typically accepted what went on in their favourite books, then moved on. Now they were beginning to take their popular culture personally, and to expect their favourite works to conform to certain expectations.”

That last bit especially summarizes modern fandom of nearly all entertainment franchises; most recently, feedback from fandom was taken into account prior to planning ST: Discovery season 2 and the upcoming series Strange New Worlds owes its existence to fans’ love for the rebooted Captain Pike.

STG understands that Kirk’s final exit from the Star Trek stage was unpopular, though we have no flurking idea why. In the otherwise forgettable Star Trek V, Kirk drops the line “I always knew I’d die alone” – so what else did you expect? And not only does Kirk go out an apparent hero in sacrificing himself to save the crew of the Enterprise-B (and its barely competent captain) plus a ship’s worth of imperiled El-Aurian citizens, he gave up a personal heaven to save a civilization fated never to know of his existence.

In STG’s view, that’s going out like a hero. Not only would writing Kirk back into the Star Trek mythos cheapen Kirk’s noblest selfless deeds, it would also require a level of scriptwriting almost certainly guaranteed to be pure fan service: According to this latest round of Star Trek 4 rumors, Commander George Kirk (as portrayed by Chris Hemsworth in the 2009 movie) would also be involved in the storyline. How exactly three timelines and three parallel universes can be successfully assimilated into a single 2-hour script is admittedly beyond our imagination and, again, would likely result in little more than preposterous fanwank.

So, Star Trek fans and especially you ST-related media, STG exhorts you: Enough with the will-Shatner-return stories.